Because of their impact on growth, both economic growth and growth in employment, there is a lot of discussion about what needs to be done to support SMEs, small and medium sized enterprises. They make up the vast majority of all companies and contribute about 2/3 of employment and economic value added in Europe. Since the 2008-2009 financial crisis, the EU have devised specific programs to provide support to the sector and reporting tools have been created at regional and country level to monitor progress. As an Austria-based provider of growth capital to so called Gazelle companies, fast growing SMEs that are particularly important for the creation of net new jobs, we are interested in understanding what the situation looks like here in Austria, have these programs had an effect on the availability of funding for SMEs? Has there been an improvement over the last couple of years? How does Austria compare to other countries in the region?

Based on our frequent conversations with potential target companies, our answers to the above questions would be: to date the EU programs have had little impact on the market, that there is little progress and that Austria is not comparing favourably to its peer countries within the EU. Our view is that an improvement in the availability of capital, if at all, is due to a general improvement in economic conditions and, to a lesser degree, due to alternative sources of capital that are emerging. Improved overall economic conditions support sales growth and internal cash flow generation in the sector, which in turn is reinvested to support growth.

Using data from publicly available sources, we are able to state that our impression is largely supported by the facts.

According to OECD (Financing SMEs and Entrepreneurs 2017, an OECD Scoreboard), new bank lending has been declining in Austria since 2009. Bank lending to SMEs has declined from EUR 10.05bn in 2009 to EUR 8.11bn in 2015. Loans and guarantees from the official sector to SMEs has been fairly stable at around EUR 1.00bn per year over the period between 2010 and 2015. Venture and growth capital is on the rise but from a very low level and reached a total of EUR 0.2bn in 2015. In relation to GDP this was 0.035% in 2015, which can be compared to for example the USA with 0.45% in the same year but also low compared to many European countries. Against this background, we can firmly state that the new programs have had little impact and that the trend is negative rather than improving as regards access to funding for SMEs.

As regards the last question we want to find an answer to, is Austria better or worse off than the other countries in the region? Unfortunately, also here our fears are confirmed by the OECD numbers. Looking at the bank lending growth numbers, which contribute almost 90% to the funding pool available for SMEs, among the other European countries covered in the OECD report only Luxemburg perform worse than Austria. Despite recent improvements in the supply of funding from other sources, it will be a long while before they will be able to fill the accumulated gap left by the decline in bank lending over recent years.

One additional interesting data point from the report is that innovative SMEs suffer more than the average from the lack in supply of funding, more about this in a later post. 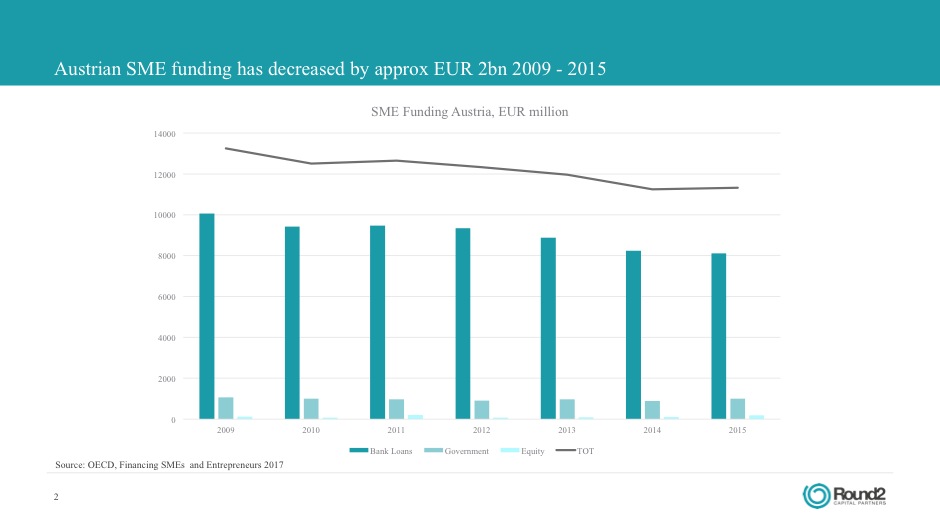